The Hertfordshire Countryside Magazine is a mine of valuable information about the county. It started as a quarterly publication in 1946 and later switched to a monthly and is still being published. The format has changed somewhat over the period but always contains articles on the county. Many of these articles relate to the county's history, while other refer to current matters and lifestyle issues. Articles range between one and four pages long usually including pictures. There are also many Readers' letters - which often contain personal reminiscences and other historical information. There are short news items and also book reviews.

Articles are written in a popular style, and while some of the articles are simply summaries of information elsewhere some are unique sources of information. For instance the issues copies contained an important series of articles on The History of Hunting in Hertfordshire by Major Douglas Neale which are essential reading for anyone interested in the subject. These stimulated correspondence in the Readers Forum, and some of these, such as Reginald Hine's letter about a pack of hounds in 1688, contain information unavailable elsewhere.

Bound sets of copies are available in the larger Hertfordshire Libraries.

It is clearly impractical for me to index all items of interest on the web site - but when I know of an article which contains useful information it is appropriate for me to include a reference, and perhaps a brief extract to encourage researchers to explore this valuable resource further. In some cases the link will be to a pdf file containing a copy of the original article.

The End of Hertfordshire Countryside 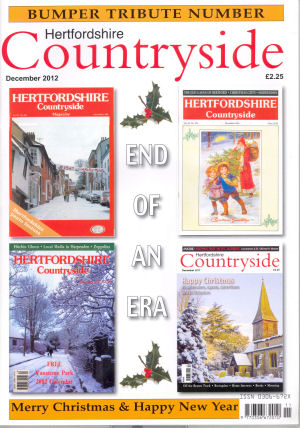 The cover of the December 2012 issue of Hertfordshire Countryside is headed "End of an Era"  and after 67 years and 644 issues the magazine has bitten the dust.

The magazine started as a slim quarterly in 1946, and was quite clearly a magazine of Hertfordshire with an emphasis on historical interests, and a few adverts to help support it. It was popular and later switched to monthly publication. It was a major source of information of relating to the history and traditions of the county and there is a ready second hand market for early second hand copies.
However by the 1980s it was becoming more of a life style magazine with a Hertfordshire flavour. While to the end it still contained a small number of articles of purely historical interest there were also articles which were clearly written to support the adverts for hotels, restaurants and private schools, and others.
The end comes with the retirement of the publisher, and in his farewell editorial he "looks at some Countryside milestones at the end of an era."  For many of the loyal readers the era started  in 1946 but he effectively dismisses the important role the paper carried out in its early years by failing to mention anything of the magazine's achievements before he joined the magazine in 1984! Perhaps the real reason the magazine has died is because it lost its original feeling for the heritage of the county in today's over-commercialized environment.
Having said this the last issue contains several interesting articles. The Spirit of the Stort looks at the history of navigation on the River Stort. There is an attractively illustrated article of The Ayots and another Warm Hearts in Cold Christmas - about Cold Christmas Lane and the villages of Wadesmill and Thundridge. There is also a biography of Abe Mitchell, Verulam's Golf Pro, who I recently mentioned in this newsletter.